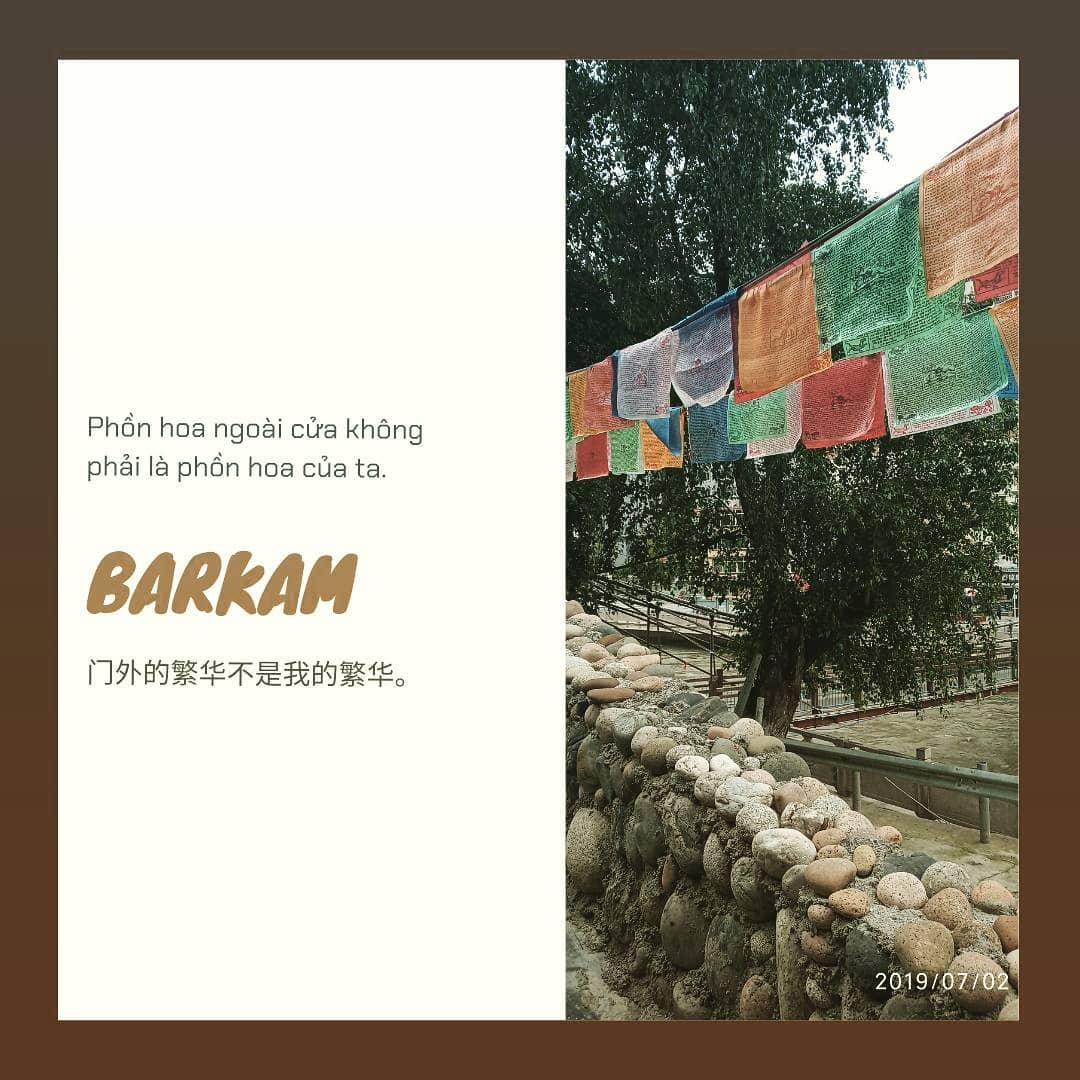 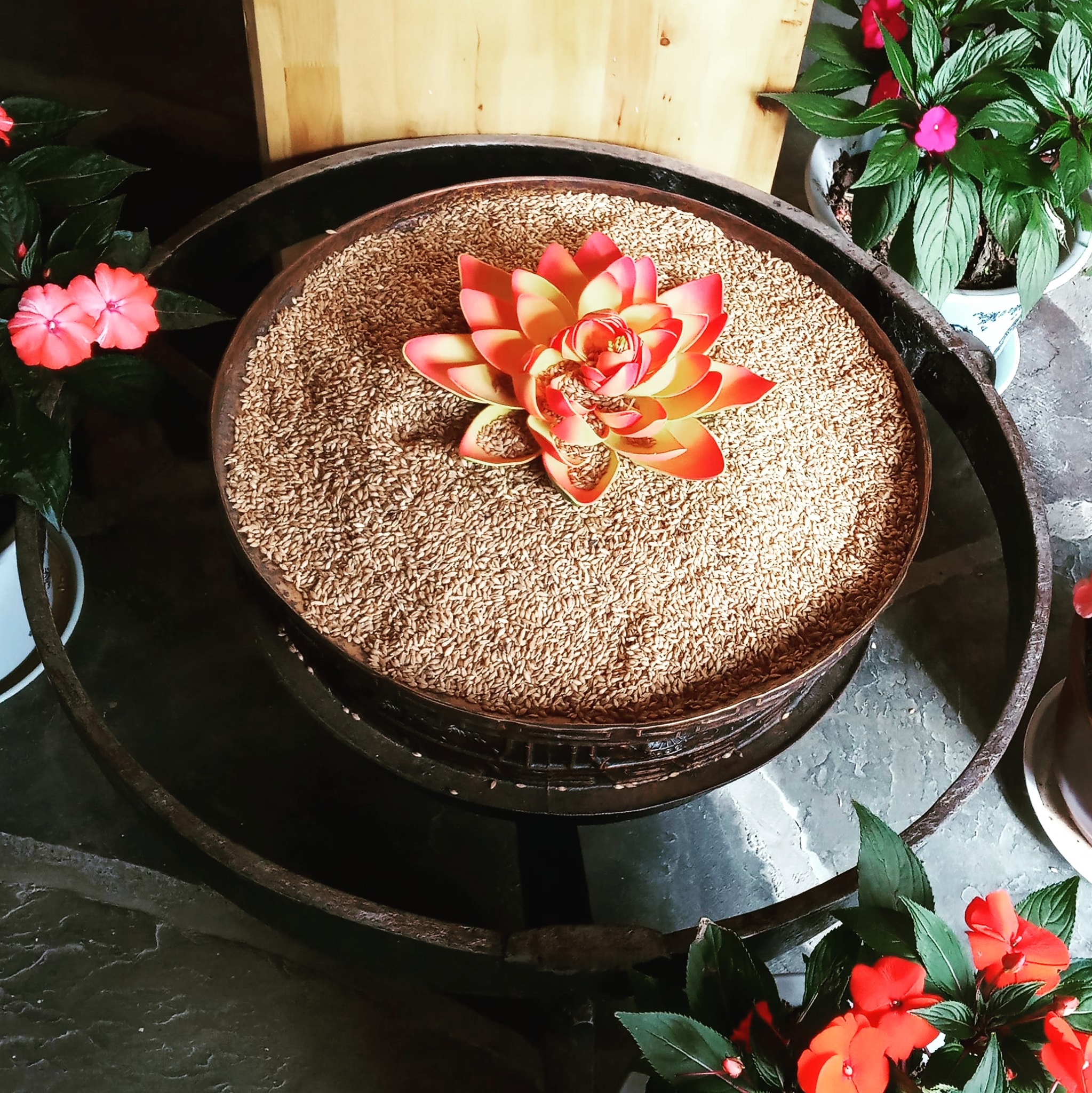 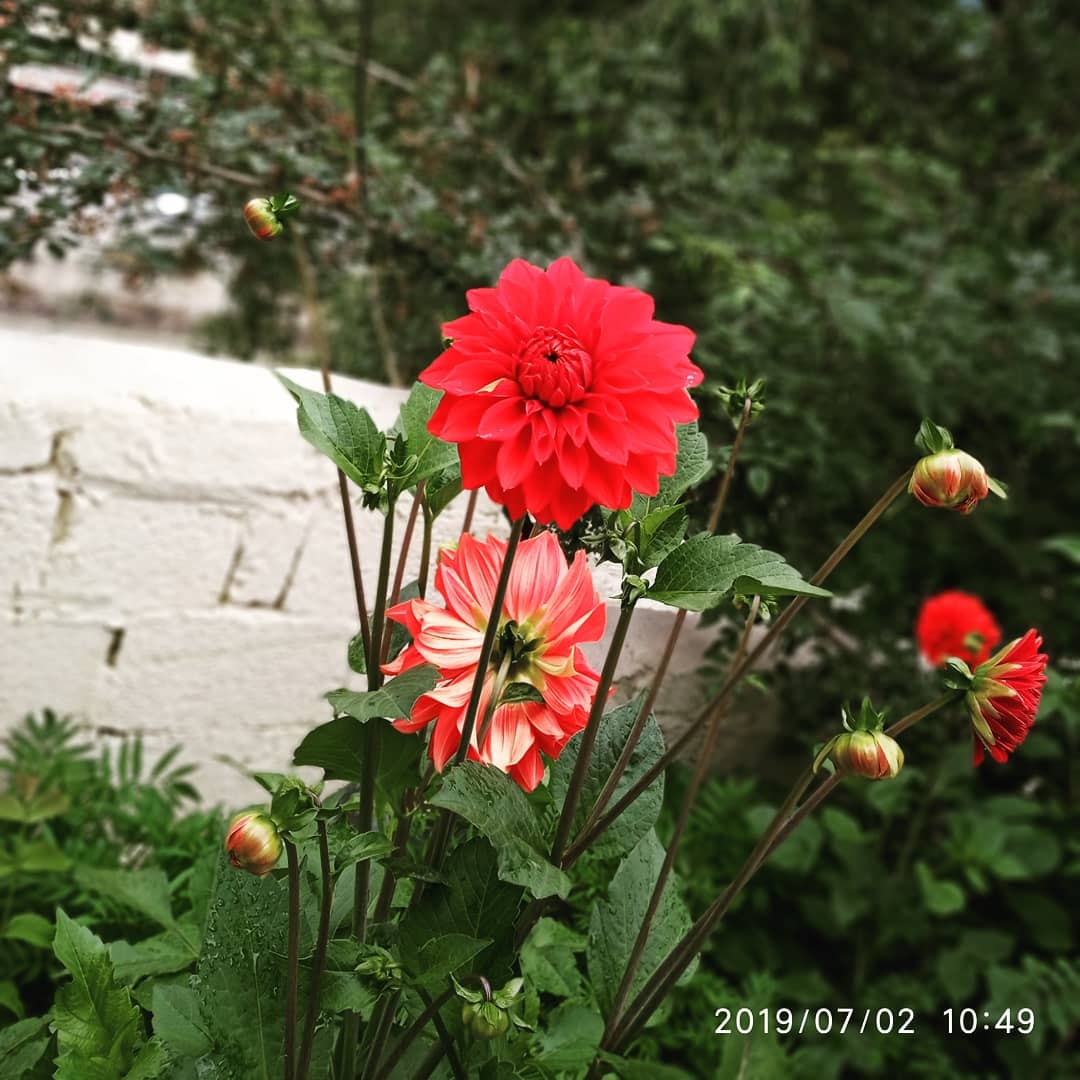 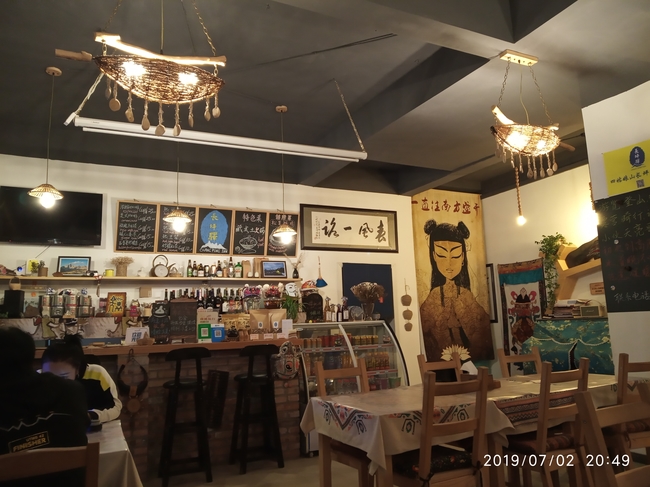 Barkam to Aba/Ngawa Tibetan and Qiang Autonomous Prefecture was like Kangding to Garzê Tibetan Autonomous Prefecture, meaning it was the seat of the prefecture. There was a river flowing alongside the town, too. But I felt that Barkam seemed to be much less crowded than Kangding and had no sign of international travelers.

Today was a great public transport experience. Because the driver said 8:30AM the bus to Xiaojin would depart, this morning, I came to the station early to buy a new ticket. Turned out I was too early, again. The bus would depart around noon, again.

When I went back to the hostel for a seat, they invited me to have breakfast. So kind. Or they didn’t know that I had already checked out. And it was a square meal with green bean and rice porridge, two Chinese steamed buns (mantou), a boiled egg, peanuts, and pickled cucumber. Best breakfast so far.

It was a bumpy bus ride to Xiaojin via winding roads and passes. Sometimes, I thought the bus couldn’t get through some big stone piles on the road. But thanks to the onsite wheel loader and rotary mixer, plus the help of the bus staff, there was a connecting bus waiting for us somewhere on the way to Mt. Siguniang.

The 10-hour on the bus ride yesterday was not as tiring as 6 hours today; however, I enjoyed this crowded bus from Xiaojin to Mt. Siguniang, and moreover, kindness of Chinese people.

They stopped near the Changping Valley site under the rain, so I picked that hostel right there. Its decoration looked warm and comfortable.

I didn’t know that I saw the Hui mosque the day I arrived in Langmusi. It was on the right side of the monastery near the bus stop and on the way to the hill that I trekked in that evening. I found out when I saw the photos I took that day.

Before getting on the bus back to Zoige (Ruoergai), I went inside the mosque but all doors were closed. I was at the Ruoergai station before 8:30AM but the tickets wrote that the bus to Xiaojin started at 12:10PM.

This place must be the highest place I’ve been to in this trip. It was cold today, too. I followed the Hanoian teacher girl to buy some flat peaches. They tasted just like other peaches I’d eaten before. But at least I tried.

After having potatoes and beef rice for lunch, I found a cat playing with my backpack hit belt.

After 1 hour, we were stuck again in a traffic jam for 1 and a half hours. First time I got to use my paper fan. 10 years later, Sichuan traffic jams were much more orderly and polite.

It was so hard to ask for the direction to Mt. Siguniang here because the station was closed when we arrived in Barkam aka Maerkang at 7:30PM. The bus driver told me there’d be one early tomorrow morning.

Then I leaded my team to find a hotel. I saw one looking kinda luxury next to the bus station. I realized that Chinese people used a face recognition machine to check in to the hotels here. After waiting for a while, I got the boot because I was a foreigner. I got the same result from one or two places nearby.

After wheeling my suitcase faster to the downtown worrying it would be dark soon, I saw another luxury hotel after crossing a small bridge. Luckily, they accepted 4 foreigners in 1 room. But the receptionist took so long to register me that I had to tell her I’d come back to get my passport after dinner.

The room was the most well-equipped I’d ever seen in Sichuan, and the bathroom looked extravagant too.

Later, when I was out seeking a place for dinner at 9:00 PM, I realized that this town was almost empty. It was hard to find a noodles restaurant that was open. Didn’t know why the chef kept laughing while talking to me. He didn’t believe I wasn’t Chinese until I showed him my passport. However, he cooked delicious noodles. 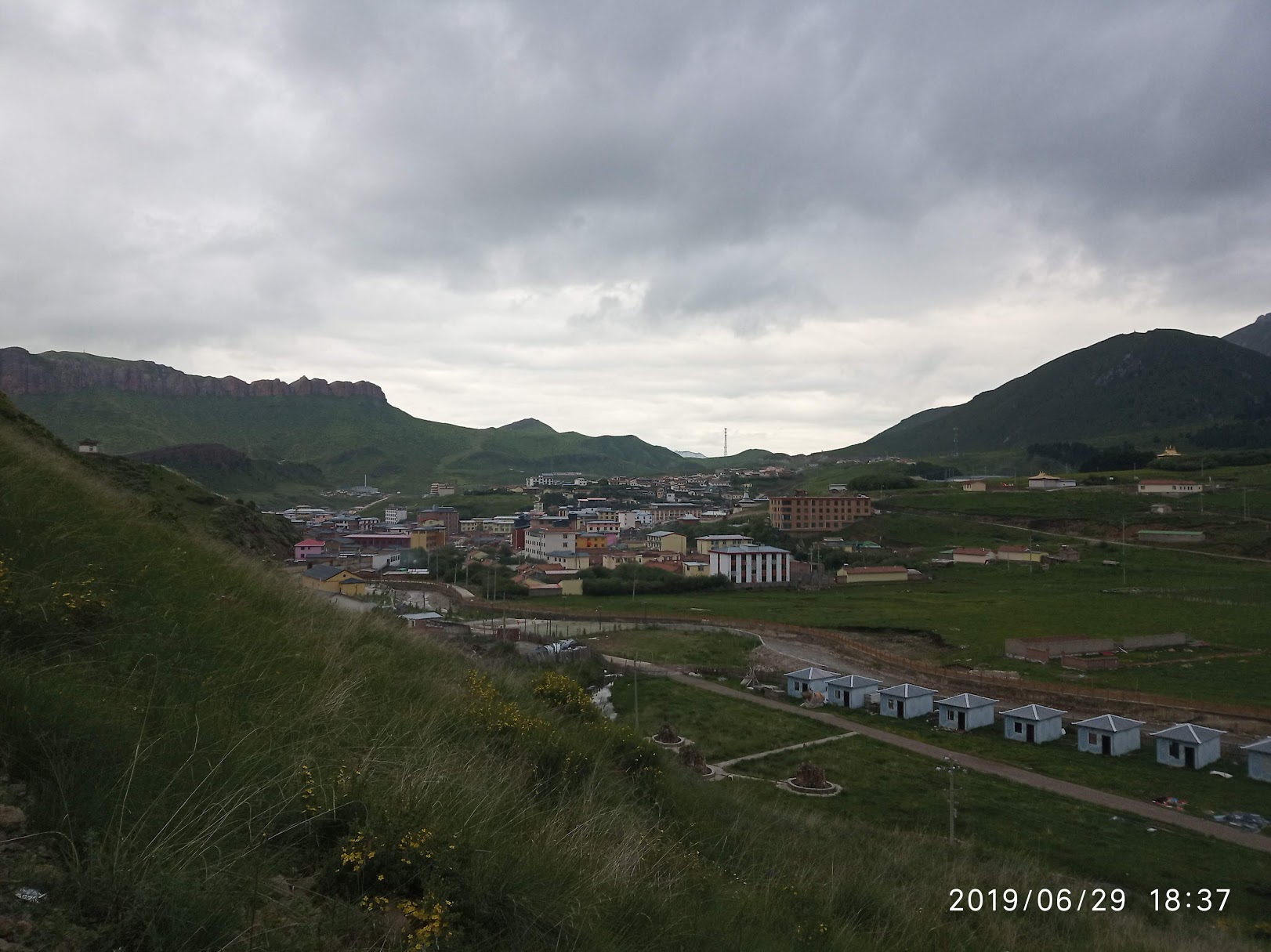 Really, Langmusi (Taktsang Lhamo according to Tibetans) was out of my initial plan. This was somewhere unplanned. Its name wasn’t in my last plan sheet in May. It was somehow a last minute decision. It turned out to be the best place of the journey.

As we all stayed in one room with 2 beds, I woke up quite early in the morning. Unluckily, the rain from yesterday evening has not stopped yet, hence my plan to trek a nearby hill was ruined. A bit later, I decided to go out with my umbrella and found a boiled corn for breakfast. However, the corn was so hard that I couldn’t finish it while it was still hot.

While we were roaming around Zoigê, a driver found me opposite the bus station and stopped for a chat. I was intending to ask for some direction. He told me that there was no direct bus from Langmusi to Mt. Siguniang and that I had to get back to here in Ruoergai first then go to Maerkang (Barkam). He offered 120 yuan per person for the trip to Barkam. I took his name card, but I didn’t think I’d hire a private car.

I met a cute Tibetan kid with his mother (?) on the street where he grabbed my hand and shook it gently which warmed my heart. It turned out that he was begging for money. Then I remembered having met many adult Tibetan beggars in Sichuan 10 years ago.

I finally had the best meal of this trip so far. I picked one of many restaurants opposite the bus station. The wonton was so good, and it tasted even better with the delicious dipping sauce.

The bus to Langmusi was the same with the one we took to the Flower Lake yesterday. However, we were stuck in an hour long traffic. Was it because today was Saturday? The bus driver who was informative yesterday also told me to get back to Zoigê with his bus if I wanted to go to Mt. Siguniang the day after tomorrow.

The bus passed some small streets on the way to the Langmusi bus station. Then it stopped at a small parking lot in front of a big gate. I guess this was one of the 2 famous monasteries of Langmusi as I saw a ticket collector.

When I checked in and put down my luggage, I went down to the hall to realize that there was some misunderstanding with the hotel owner and his father who took us inside. I had to bargain for the two rooms again. This must be the tallest building around here. I had to climb to the 3rd or 4th floor. The rooftop where we found to hang clothes was still 2 floors up.

It was around 6:30 pm and the two Hanoian girls didn’t wanna go see the nearby monastery yet. So I decided to hike the hill nearby. It didn’t look far and the day was still young. Luckily, the Dien Bien girl accompanied me at last even though she was afraid we couldn’t be back before it was dark.

This was my bravest experience of the trip, I finished climbing the hill passing old and damaged wooden stairs in a gloomy afternoon. On the way, I also had to passed a tree bridge with no handrails. It would be threatening to me if I did it alone.

The 2 of us got back to the hotel around 8 pm and I still saw the hill vividly from my hotel room. I tried to reheat the corn in the boiling water for dinner, but it was still too hard to eat.

The Hanoian teacher girl told me she counted the money and thought that we spent half of the budget. I startled at first, then realized that it was half of the journey already. For the rest, I didn’t think it would cost more than what we had already spent.