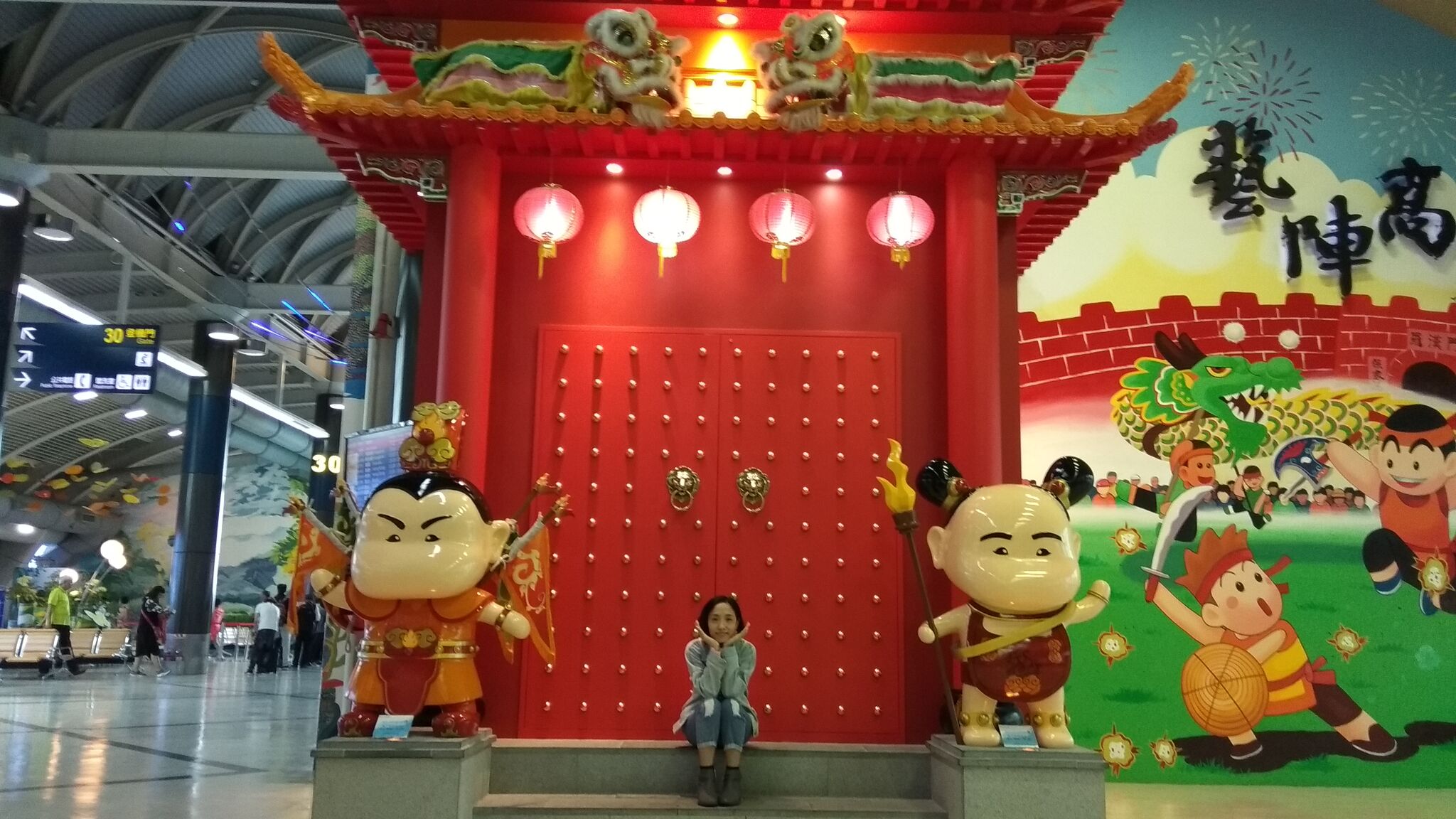 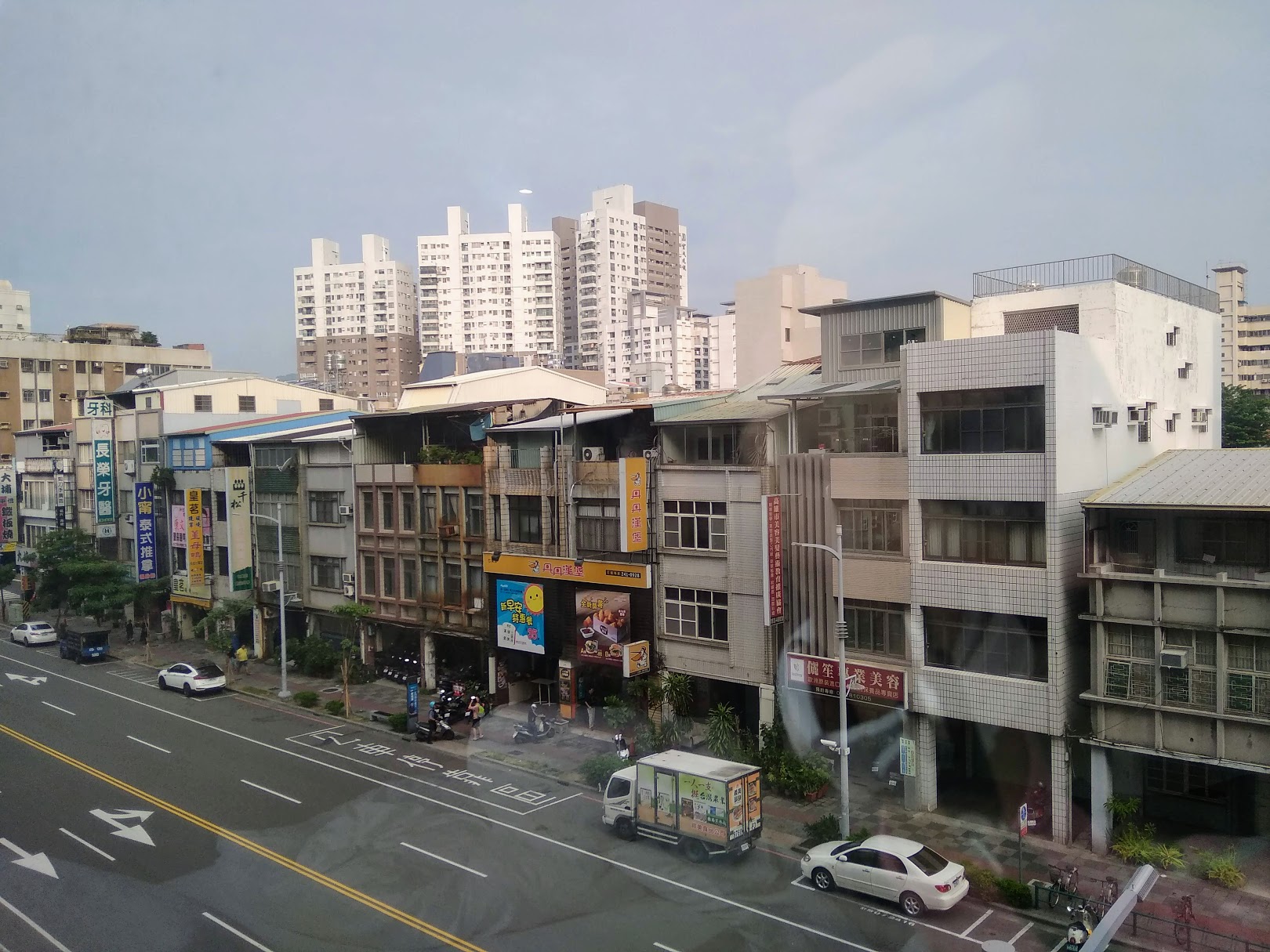 The hotel almost had nothing left for us at breakfast. We then headed to Kaohsiung Airport and left Taiwan around noon. Finally the tour had some lunch with VietJetAir for us. I shouldn’t have eaten the noodles I brought with me. Next time, I wouldn’t bring noodles to any where.
The best thing about this tour was the knowledge about Taiwan politics. I now understood more about Taiwanese culture as well. I expected to come back to Taiwan soon to visit more places, maybe when Mayday has a live show here. 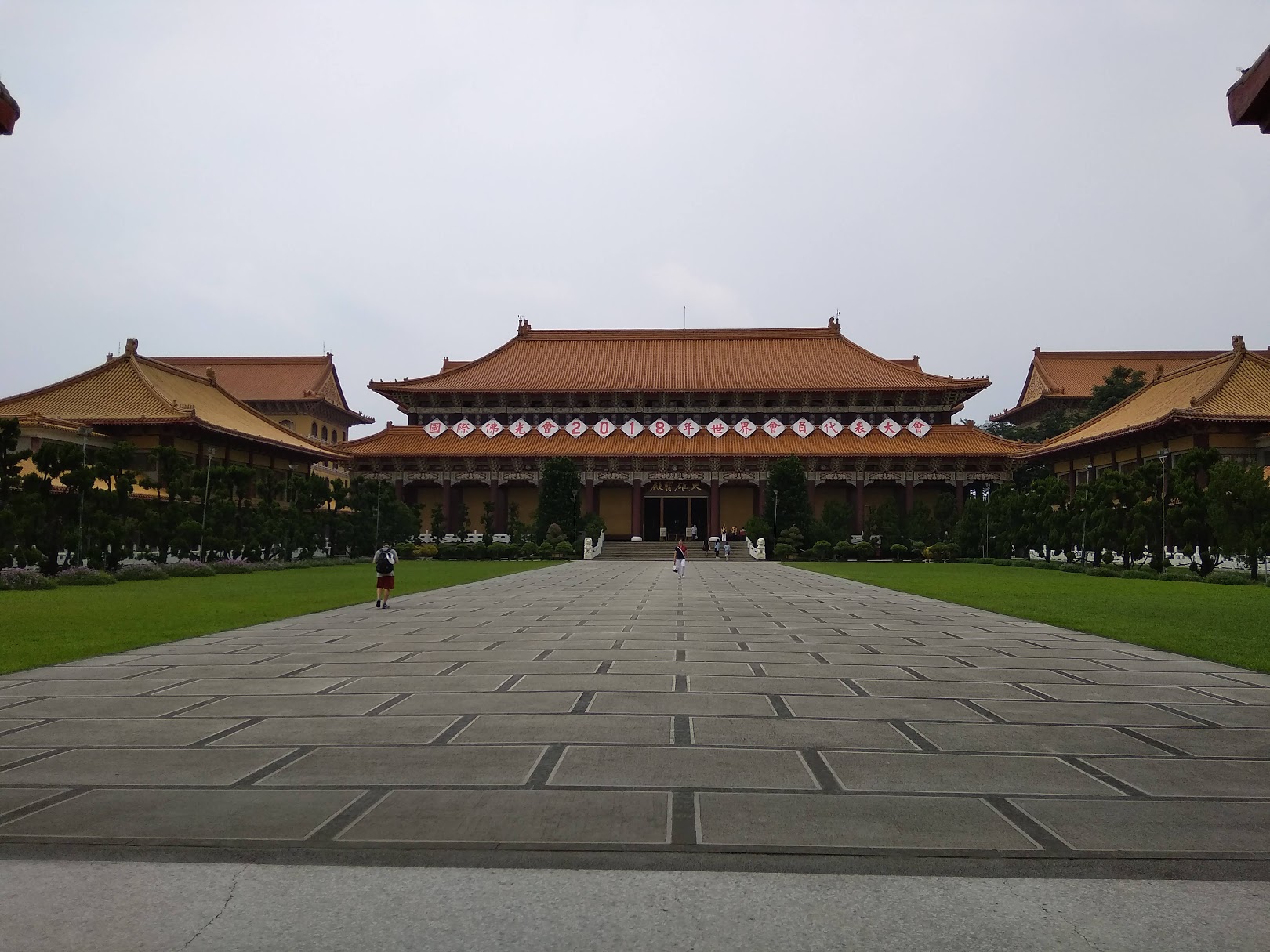 The breakfast buffet was so bad that I was still hungry after that. Then the tour bus took an hour to Alishan in Chiayi where we visited a tea store. Didn’t know that tea could be so expensive. Though I opted not to buy tea, I still learned of how Taiwanese made and drink tea. Then the bus took us to another store where they sold Taiwanese fried fruits.

The more south we got, the worse were the meals. However, at least I could eat something, unlike some people on our tour who were more picky.

In the afternoon, we visited the Fo Guang Shan Temple in Kaohsiung. Earlier this year, we visited the replica one in Wollongong, Australia. In general, the main temples of these 2 were similar. The outsides were different. They both didn’t have a good impact on me except that the they were so big.

Then we visited the Dragon and Tiger Pagodas on the Lotus Pond. This place must be an overrated tourism place of this trip. There was almost nothing to see. The smell of stink tofu was the only thing that was left of this area.

Before dinner, we went to a store to make some pineapple tarts by ourselves. The experience was kinda good as I haven’t baked anything for quite some time. Saw some sunset at the Pier-2 Art Center near the Fisherman’s Wharf.

Though the room in the Hotel D had a good decoration and was bigger than the other previous 2, it only had a walking shower and not a bathtub.

The tour guide took us to the Liuhe Night Market and here we had the first milk tea at a Tea Top store. At this place, I found someone who resembled Jackie Chan and asked him to take some photos. Other group tour companions also mimicked my action though we all doubted that he was just a fake.

Last but not least, my bond with the others was tighter when we had lobsters and played cards together late at night. 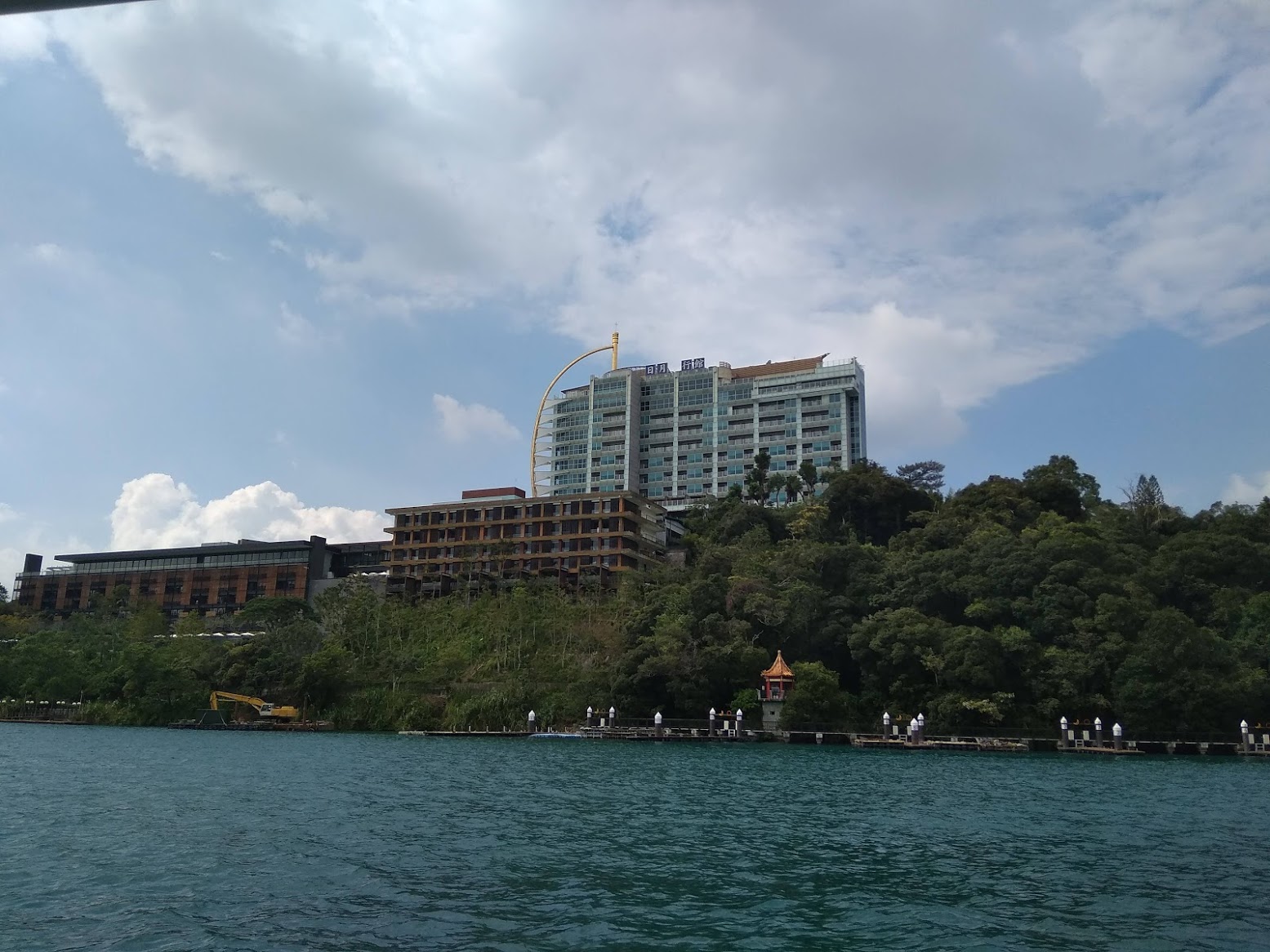 It was raining this morning when we wen to visit the Taipei center. Taiwan was prepping for the upcoming national day Oct 10 so I had an opportunity to visit some interesting flags at some government buildings. The fengshui store was another destination before we departed Taipei.

Sun Moon Lake in Nantou was a good place to relax. We enjoyed the scenic cruise ride around the lake with stories about Chang Kai-she and his lady Song Mei-ling and a glimpse of their resort by the lake.
Wenwu Temple was our next stop and it involved a little hiking. Then we visited a lingzhi mushroom store where we enjoyed a sip of its water and learned about some ethnic minorities in Taiwan.

Taichung hotpot dinner must have been my most fav meal of the trip. Which differentiate Taiwanese from Vietnamese hotpot was the machishao tasting like Japanese mochi. Didn’t know that I could have it with hotpot.

The City Suites Hotel in Taichung had a funny bathroom with a view to the beds. After checking in, when others took a cab to some night market, I asked my sis to go out like a Taiwanse. I meant, I preferred to go find a supermarket and see what/how the Taiwanse people buy, not like how the foreigners do. This could be our only time alone so this must have been my most fav time of the trip. We finally bought some gifts for our family. 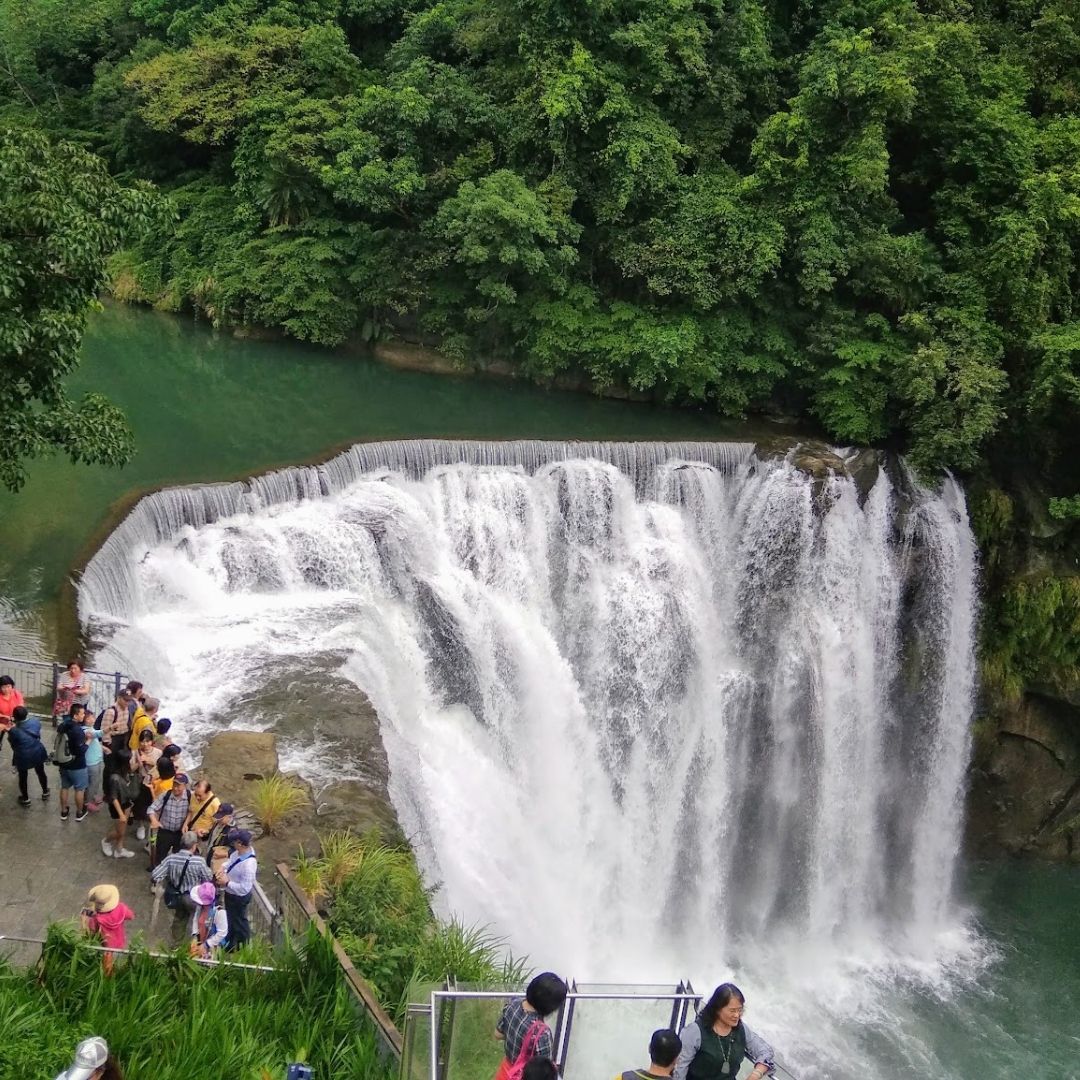 After so many days convincing my sis to go somewhere abroad this fall, I finally had her to travel with me to Taiwan, my fav place recently just because of Mayday. We booked a 4D4N tour by Nam A Chau on Tiki because the it offered the lowest price possible.

We spent the first night on the VietjetAir plane. The tour leader brought us some snack (breads) but we didn’t eat them all because we were so tired that we just wanted to sleep. Lately, I’ve brought some music with me so I could rest easily. But this time I still couldn’t have a good night sleep on the plane after all. Thanks to the ushanka, I kept my ears warm enough on the plane. This should be a must-bring hat for me on all flights from now on.

Was it the first time I welcomed dawn on a plane? I don’t remember. But the aurora really lifted my mood after 3 hours. After clearing customs and getting my booked SIM card at Taoyuan airport, we headed to the double-decked bus for our first meal in Taiwan. Our female tour guide was a Vietnamese who used to work in Taiwan for many years then later married a Taiwanese, so she explained the geography and cultural differences of the Northern, Central and Southern Taiwan so well. I thought she was the best tour guide I’ve ever met. I bet this tour would be a great experience which would change my perspective on traveling in a tour group.

Just like in Australia, all people in the bus must fasten their seat belts. The tour bus today took us to Shifen where we visited the waterfall and released a hand-written lantern to the sky. It’s my birthday today, so my wish was for health and peace, written in Chinese-Vietnamese.

After lunch, we went to the Yehliu Geopark and then the famous Taipei 101. It was good that Taiwan tourism was limited for Chinese mainland people. I hardly saw Chinese people invading these tourist spots.
After having dinner in a basement restaurant, we came to the Look Hotel for some rest. The tour guide helped us find the way to the Ximending night market where we strolled packed streets of food carts and musical performances. Finally, I took a sip of the real Taiwanese tea from 50 Lan brand. Such great tea with delicious toppings!