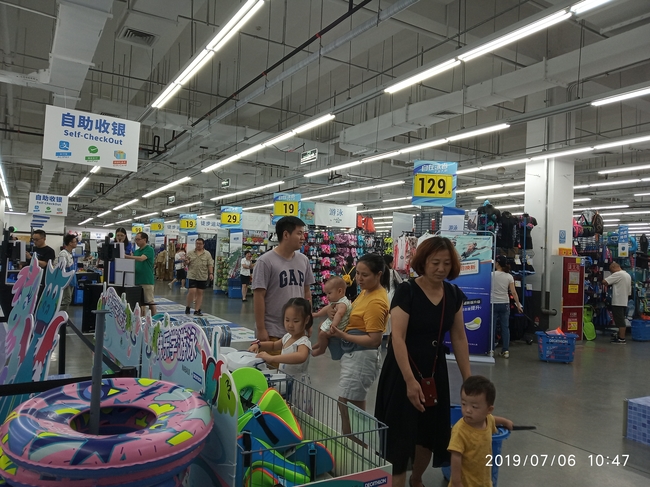 Luckily for me, I could sleep well until 7AM because 2 girls checked in long before midnight yesterday. Because it was raining, I waited for a while then decided to go out shopping.

It took me an hour to get to Decathlon. It was my first time at such a big sport store in any country. I wanted to buy many things, but then decided to buy some small gifts and a 10-lit rucksack that can fold up into a small ball. I need extra storage for my stuff.

I also saw IKEA nearby so I dropped by to see why it was famous. Many people came here for a snack or lunch (?!) I also went into a mall and checked out Zara, H&M, Uniqlo stores, etc. But I didn’t buy anything.

In the afternoon, I visited the Wenshu Temple. I used to visit one of the street here 10 years ago but I wasn’t so sure. This area even seemed to be bigger than the Wuhou Temple area where I stayed.

After getting back to the hostel, I took a late afternoon stroll to the so-called Tibetan Quarter which was near. But there was nothing impressive.

I met 2 of my companions at the Jinli Street. I decided on trying the giant grilled squid after drooling a few times. And it was indeed very tasty.

Another one of the girls in the dorm room thought I was Hongkonger because of my English, except from the girl I met on the first night here.

Just figured out I was a lil bit too naive about the metro system. I didn’t need to buy separate tickets for connecting trains. It wasted time (queuing at ticket booths), and maybe money (the longer distance I went, the cheaper it was).