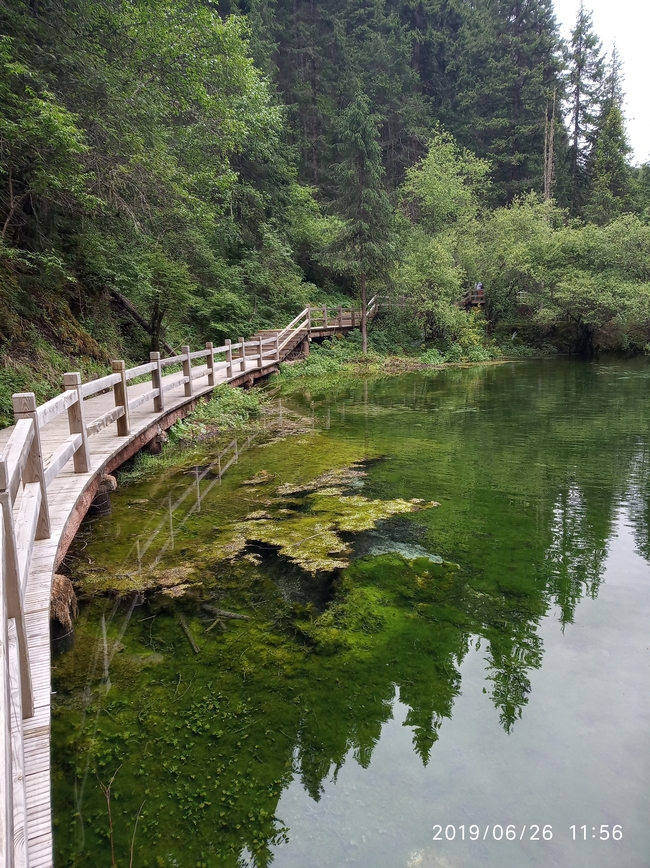 I didn’t have a good night sleep with people coming in and going out. Why did they have to make so much noise at night? I envied the other 2 Hanoian girls having their own room yesterday because there weren’t enough beds in the dorm rooms. And I found out the Dien Bien girl also had to work again early in the morning. What a nuisance having to work so hard on her vacation!

First I only intended to buy some tea, then I found myself buying some baozi for breakfast, too.

The driver took us to Mounigou Valley. The 2 Brits surprised me when they said they were students. They looked older. However, what I meant to say was they paid cheaper for the tickets here. We went to the Zhaga Waterfall for starters. My legs were so numb I didn’t climb all the stairs, just waited for them to go outside later. Turned out they took longer than I thought.

Before reaching the second place, the driver took us to a stop at a secluded monastery called Tara around 10:40AM. I walked inside with the driver and 2 Brits then walked around outside a bit. The driver seemed to be friendly with the monks here.

At 11:30 he drove us to the Erdaohai Scenic Area. There were more tourists here. Thank God the walkway was not as steep as the waterfall. I stopped after getting through the gate to have the leftover baozi for lunch.

At 2:30PM, I reached the top calcium lake because I saw people resting their feet inside. It wasn’t hot as I thought, but it turned out cold instead. When we walked out, it was just 3PM. In the morning, I helped the Brits tell the driver to come back late, but it turned out this place was not as big as Huanglong they’d seen yesterday.

I finally had to wash my clothes after 4 days in China. Because I couldn’t take a nap, I decided to buy tickets for Zoigê (Ruoergai) the day after tomorrow.

The four of us drank some beer in the garden. I then listened to my music on the phone, from Chinese to English to Vietnamese songs. Later, an old man with a guitar joined the fun with his singing Chengdu and some old Chinese songs I hadn’t known of, except for “Dang Ni Lao Le”.