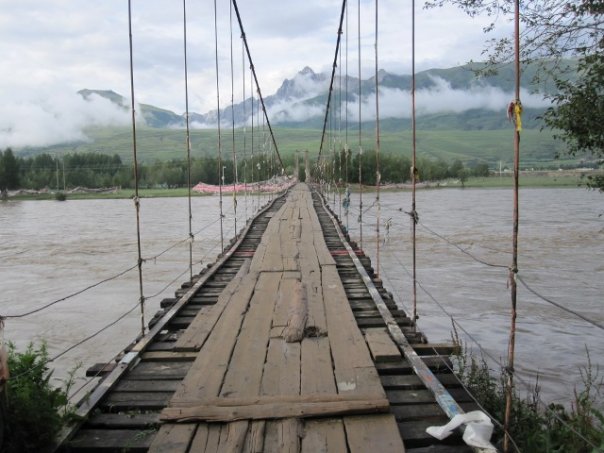 We climbed a mountain across a river from 8 AM to 4 PM. We started very early when there were clouds over them, but when we reached the top, it was all sunny. My big toes didn’t hurt me much like the hike in Kangding. My feet surely preferred walking on the grass to on the rocks.

Was it the first time I crossed a hanging bridge? Alex wrote about it, “When a way begins that way, it can’t be bad ! The flow of the river was very strong, and the bridge was moving a bit under the steps”.

The sky was clear. The sun shined directly on us. I got sunburned on my hands where they were exposed to the sun. Alex’s neck was so red. We spent about half an hour on the top of the mountain chatting. I didn’t really wanna go down at all. Why was life made of choices? I was thinking hard almost every hour that I could live here in Sichuan forever and didn’t wanna come back to Vietnam. I preferred Ganzi than the Tagong Grassland.

Alex was very nice today, letting me walk slowly without rushing me. Each of us had 2 ice creams on the way back. I was breathing in ice and breathing out cream to encourage myself that the way wasn’t so long.

On the way back, we met a group of Tibetan women. They must be peasants. They were resting on a carpet or something like that and invited us to have some tea. As usual, they thought I was Chinese, but I explained that I came from Vietnam. They probably didn’t know where Vietnam was. I tried to talk to them in Chinese. Must have been the day when I spoke so many Chinese sentences.

We also met Gal on the way back. The Israeli guy said tomorrow he would go to Litang.

Had dinner by Alex’s random choice like he did in Danba. But the food today wasn’t that good. It was too spicy for me.

Ganzi had a lot of barbecued carts on the sidewalks. We had beer with some barbecued food in front of a house. I liked it. I saw some Western backpackers copying us.

I heard fireworks again. Unluckily, there were no stars in the sky at night.